Today (July 15) we were on more of a schedule because we had a bus to catch! Since Nathan had only been to London once (and didn’t get a chance to see much), my mom suggested that we do a Hop On/Hop Off bus tour around the city. We decided to go into London Bridge on the tube since I remember seeing it as a stop. After probably 30 minutes wandering to where the bus stop “should” be, we saw one drive by and ran after it…literally 😮 It was really nice being on top of the classic double decker and mozying through the sights. 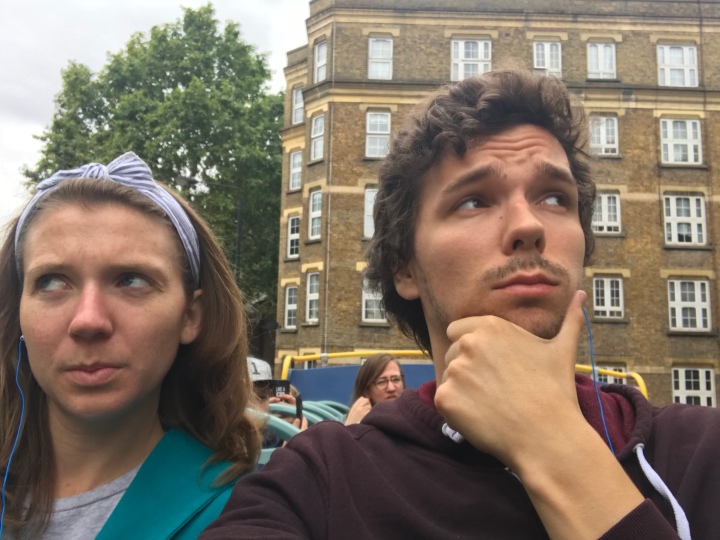 We rode around for about two hours and got off twice – at Buckingham Palace when the Changing of the Guard occurred and at Harrods to get some lunch. Nathan and I chatted about how odd it seems that people crowd around the Palace gates, probably like ten rows deep, to see men going off their work shift (essentially). To them, it is a regular daily thing to be done for the day and have another set of lads take over; however, for tourists, it is as if they are all celebrities and we are catching them having an affair! 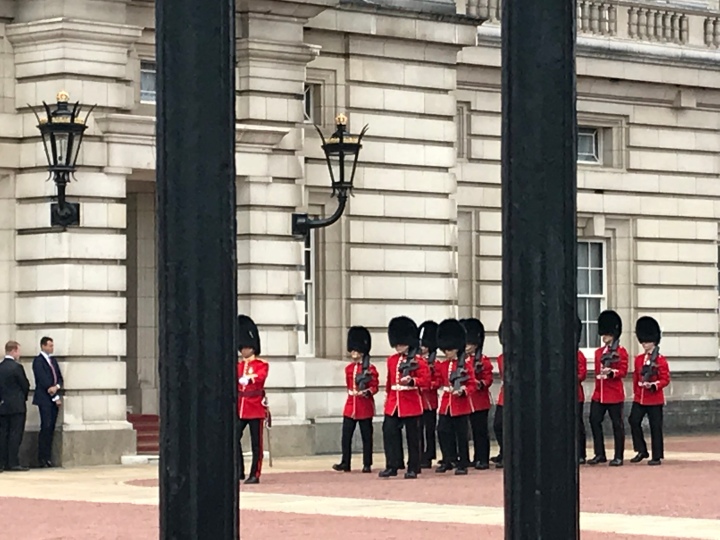 HARRODS has been a must-see attraction whenever my family came to London, especially for my sister and I. There is something so comforting about wandering through the high class retail – you can pretend you belong, even though the items are way out of your price range ha. We grabbed some sweet treats in the Chocolatier and found a Mediterranean restaurant with a gorgeous rooftop terrace. After sharing a hummus plate, traditional potato dish, and pizza, we planned our way to the Thames River Tour which was included with our bus ticket.

Setting sail out of Westminster Pier, we enjoyed a 40 minute explanation of the many bridges and buildings on and around the Thames. This was so relaxing as well as being very engaging! We learned about the origins of the Womens’ Bridge, London Bridge, and Tower Bridge from the guide who has been in the shipping trade since he was a young apprentice to his own dad. We also discovered more free  places that we should check out including the Sky Garden and Tate Modern Museum. Once at port, we then walked across the Tower Bridge (which allows both pedestrians and cars) back to London Bridge Station where my Auntie C, her friend, and my cousin Doug met us for dinner and drinks.

Now let me add that I could write a whole new post about dinner and drinks with my family because it quickly became a 5 hour chat session with about 4-5 drinks each 😀 We went to this pub on the waterfront called Hay Market, and found a large table. Mia was expected to join us shortly after work – the group of 5 (Nathan, Doug, Auntie C, her friend, and myself) soon became a group of 6. Catherine got the first round of drinks which included a pint of Old Mout pomegranate cider 😉 Doug got the second round, Mia got the third round, Nathan got the fourth round, and then someone thought about the possibility of getting food. I had cod and chips while Nathan had a vegetarian cottage pie. By that point, Mia’s friend arrived who was in London for a layover. He then had to buy a round of drinks – are you keeping up? Mia’s fiance, Ryan, was in the wind on when he would come from a work party. By this point, time had flown by like a swarm of bees to the hive..Conversations were still thriving with everyone engulfed in something different. So many varying topics were at the table that you would think someone had placed bets on the most things discussed! Ryan arrived and wanted to buy a round of drinks. By this point, most people were finishing as it was almost ten oclock (we started at 5 :p) I made Nathan get a drink and Mia’s friend got something as well. Goodbyes were quickly inevitable since Catherine and her friend had quite a trip back to where they live out of the city. Mia was also getting tired, and she had work early in the morning. We left the boys to continue the shenanigans and made our way back to her flat. We bonded over the stresses of teaching and got some much needed friend time too 😀 Nathan arrived home about an hour later, quite happy you could say ha.